Conceived in the laboratories of Virginia Tech and commercialized in partnership with industry veterans, MRC’s technology heralds a new future for coal and mineral processing. 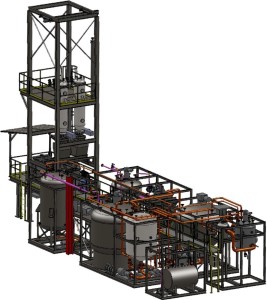 ve separation and recovery of fine coal and minerals. As Director of the Center of Advanced Separation Technologies (CAST) at Virginia Tech, he has more than 70 U.S. and international patents to his credit. Minerals processing manufacturing companies have licensed equipment, additives and processes based on his inventions to produce billions of dollars’ worth of raw materials.

In 2010, Dr. Yoon and research partner Dr. Gerald Luttrell made a laboratory breakthrough in recovering and simultaneously de-watering the finest fractions of minerals and coal. Upon sharing batch lab scale results with Dr. Stanley Suboleski, former department head of Mining and Minerals Engineering at Virginia Tech, the researchers approached industry veteran and long-standing supporter of the university, E. Morgan Massey.

Massey, who has designed and overseen construction of dozens of coal preparation plants over his career, immediately recognized the potential of the Hydrophobic Hydrophilic Separation (HHS) technology.  With the support of industry leaders Dr. Peter Bethel, Carl Bauer, and Bob Gentile, he launched Minerals Refining Company (MRC) 2012.

With financial backing from Massey’s company, Virginia Tech researchers built a 100-pound-per-hour proof-of-concept unit at Virginia Tech in June of 2013.  In tests of coal-waste slurry from a number of plants in Virginia, West Virginia, Pennsylvania and Kentucky, HHS consistently produced a coal product with ash content of 3% to 6% by weight and single-digit moisture values.

With proven technology in hand, MRC entered into a contract with a major U.S. coal company to install a pilot plant at an operating plant in Southwest Virginia. This plant used a deslime circuit that sent <45-micron (325-mesh) coal directly to the thickener ahead of flotation.  This plant took the 58% ash feed solids in the slurry and produced a 4-5% product with 5-9% moisture.  The plant became operational in late 2015 and completed testing 2017, operating for a total of 1200 hours.

Now MRC is bringing HHS into the marketplace.  MRC is now constructing its first commercial-scale plant in partnership with a publicly traded North American mining company.  Completion of the plant is expected in the first quarter of 2022 and will have an output of 20 tons per hour of high-quality metallurgical coal.